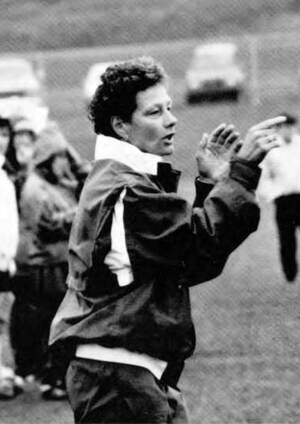 ​Jan Kasnevich basically did it all during her 33 years at Slippery Rock. A stellar athlete in her own right, Kasnevich was a four-year member SRU’s basketball, volleyball, tennis and field hockey teams during her undergraduate years as well as an assistant women’s basketball coach, head softball coach, head field hockey coach and a professor upon returning to SRU as a professional.

After graduating from Slippery Rock, Kasnevich spent two years as a member of the U.S. Field Hockey National Team while teaching and coaching at Montour High School as well as obtaining her master’s degree from the University of Pittsburgh.

She returned to Slippery Rock to join the physical education department and coach softball in 1976. The next decade was arguably the best the program has ever been. Kasnevich won 64.8 percent of her games, 127 victories overall, in her 10 years in charge of SRU softball. Highlights of the Kasnevich era included three Association for Intercollegiate Athletics for Women (AIAW) national tournament appearances and winning a PSAC championship in 1981.

Kasnevich then took on a reclamation project of sorts in 1985 when she assumed control of a Slippery Rock field hockey program that had won just 10 games over the previous five seasons. As she did with the softball program, Kasnevich quickly brought the field hockey team to respectability by posting a record of 33-22-3 (.595) in her first four years with the pinnacle being the 1987 season when Kasnevich led The Rock to a school-record 14 wins and the program’s lone NCAA Tournament appearance.

After taking a year sabbatical to earn her doctorate from Pittsburgh in 1989, Kasnevich spent eight more seasons as The Rock’s head coach before stepping down prior to the 1998 season. She officially retired as a faculty member from Slippery Rock in 2004 according to university records.
About Coach K’s endowment:

This scholarship was established first by a gift from Dr. Roberta Page and Jill Willson in 2021.  Additional gifts toward the scholarship are accepted and encouraged.

This scholarship will be awarded to a softball player who demonstrates these Core Values:  dedication, commitment, integrity, accountability, loyalty, leadership, and a team player by representing her University on & off the field.
The student athlete will exemplify a driven work-ethic in the classroom and on the field, a positive/optimistic attitude, an appreciation of the commitment that coaches, faculty and staff have extended to her that will enable her to progress toward achieving her life-long goals and in return paying-it-forward. Focus on Faith, Family, Service to Others… keeping “Core Values” her top “Priority “ Recognizing the true “Honor and Privilege” that it is to be a “Student-Athlete” at Slippery Rock.  ​