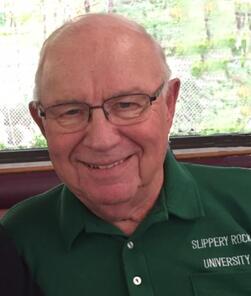 Robert Aebersold
Robert Aebersold
​
Our Slippery Rock family is deeply saddened by the passing of Dr. Robert N. Aebersold, a dedicated teacher and administrator of 30 years, who passed away at the age of 83.  President emeritus Aebersold joined the faculty at SRU in 1968 and was appointed the 13th president on July 1st, 1985.  During his time at Slippery Rock, President Aebersold was a leader of the Commission of Presidents of the State System of Higher Education and the executive council for the 14 state-owned universities of Pennsylvania.  With a commitment to international education, President Aebersold was honored in the presentation of an honorary doctorate by Hungarian University of Physical Education in Budapest in 1994. ​Along with a focus of international promotion, at his home campus, he expanded on-campus housing and planned the construction of a student recreation complex.  Built in 1998, students chose to name the complex the Robert N. Aebersold Student Recreation Center.  Following his retirement as president in 1997, a scholarship in his name was established to reward excellence both inside and outside of the classroom.  It was the University’s first four-year renewable scholarship to reward excellence.  A celebration of President Aebersold’s life occurred on November 2nd in Slippery Rock.  Memorial contributions may be made to the Robert N. Aebersold Scholarship.
​ 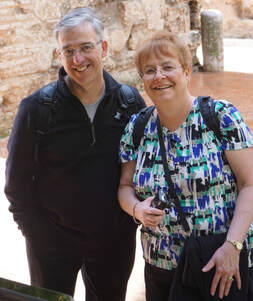 Lawton’s parents didn’t attend college but they wanted a better life for their son.  Lawton was a first generation college student and, to this day, he has a passion for those who are the first in their family to pursue higher education.  For this reason he recently created the Lawton Family Scholarship for full-time first generation college students.
​
Lawton himself says that he was never an amazing student at school but education opened doors for him that otherwise would not have been possible.  For his first job interview, the employer asked, “Do you have a college degree?”  Lawton said, “Yes.” and got the job on the spot.
Lawton loved his time at SRU.  He was a student manager for the track and cross country team and bonded with the athletes.  He has fond memories of Coach Bill Lennox and had the opportunity to work with a handful of All American athletes.   During his time on campus he was “always busy” and “never bored.”
​
The Lawton Family Scholarship had its first recipient in 2018-19.  The recipient, Noah Klingensmith, wrote, “The money from my scholarships has helped my pay for essential items for college, such as textbooks and other school materials.  I am extremely thankful to have received this generous and thoughtful gift." 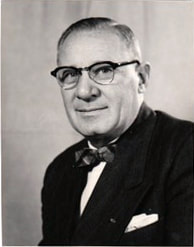 ​Anatomy, physiology, statistics… these are the names of classes that strike fear in the hearts of students.   These were some of the classes that Dr. Elmer B. Cottrell taught when he worked for Slippery Rock University.  Yet, he also taught gymnastics and lifesaving.  In fact, Dr. Cottrell was a diverse and talented man who wore many hats while a faculty member on campus.  He served as assistant football coach, assistant basketball coach and head gymnastics, tennis, golf, and swimming coach.

Dr. Cottrell drew up plans for the East-West Gym swimming pool which was the first swimming pool on campus and then started the competitive swimming program.  In 1970, posthumously, he was elected into the Pennsylvania Swimming Hall of Fame.

This tireless man worked at SRU for 25 years from 1923 to 1948 and then retired to work for the Commonwealth of Pennsylvania as the Director of Health, Physical Education and Recreation.  He served in that position until his death 11 years later in 1957.

Dr. Cottrell was also founder of PSAHPERD, The Pennsylvania State Association for Health, Physical Education, Recreation and Dance, which is having its 97th convention this year.  Each year PSAHPERD gives out 16 Awards including Teacher of the Year Awards and Athletic Director of the Year.  The highest award that this organization gives is the Elmer B. Cottrell Award to recognize exceptional service and leadership to PSAHPERD and the profession.
​
In 2004, his children, Eleanor Cottrell Hartzell ’39 and Dr. Edwin Cottrell ’43, decided to pay homage to this amazing man by establishing a scholarship in his name.  The scholarship is a tribute to their father’s life-long commitment to the advancement of health and physical education.